You are here now : » Rhetoric Ring > Tribute to Richard M. Weaver > Most Humane of the Humanities

In what sense is rhetoric the most humane of the humanities?

An illustration will go a long way in helping explain this famous assertion of Richard Weaver’s: 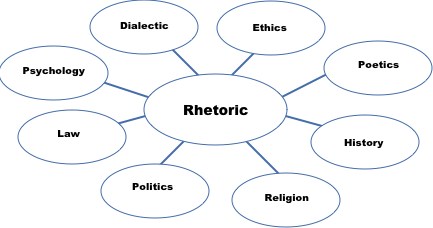 Aristotle begins his Rhetorica by asserting that rhetoric is a counterpart of dialectic. What he means by this is that rhetoric and dialectic are parallel faculties; they have no subject matter of their own, they deal with similar matters and share a common root. (click here for more on the relationship between rhetoric and dialectic.) Aristotle also notes that rhetoric is a counterpart of ethics insofar as one ought to rightly relate to one’s audience. One ought to speak truthfully, exercise goodwill toward the audience and so on. Aristotle’s take on ethics also results in some of the earliest reflections on psychology. Why? Because, in order to rightly relate to an audience, one must first understand “what makes people tick” in general, and one must also do a bit of audience analysis. Not that one must learn to “tickle the ears” of the audience, but it is impossible to persuade an audience that has been alienated. As a result, Aristotle spends a great deal of time in his treatise discussing, for example, various temperaments and the types of argument that would appeal most to each. So dialectic, ethics, psychology and rhetoric are all closely related.

In the Roman era, rhetorical doctrine was “brought forward” primarily in the law schools. Rhetorical training was the means of equipping one to plead one’s case. Similarly, in the Middle Ages, if it hadn’t been for training in hermeneutics and homiletics, equipping priests to teach and preach the good news, rhetoric may have been lost to the West.

Of course politics and rhetoric have always been closely associated (which explains, to some extent, why rhetoric held in disregard today!) What does a deliberative body do? It argues the relative merits of competing policy proposals. An utterly rhetorical enterprise.

Poetics is the study of style. In order to give one’s arguments substance, they must have both style and historicity. In other words, it is not as powerful to argue for, say, a dam project, by means of abstract arguments regarding hydro-electric power and the wonders of engineering as it would be to compare the proposed project with what has been done in similar situations in the past. Likewise, a “bare bones” argument will not carry as much weight as one that evokes vivid images in the audience’s imagination.

Consider these relations, in toto. Rhetoric either depends upon, or is highly implicated in, all these arts, and they are all very humane arts. That is the sense in which rhetoric was considered, for most of the past 2,500 years, at various times in its development, the Queen of the Liberal Arts, the cornerstone of liberal education, as Weaver puts it, “the most humanistic of all the disciplines.”

SEND US A MESSAGE

RhetoricRing.com is a community service project of Dr. James Tallmon, sponsored by his friend and colleague Isaiah McPeak .